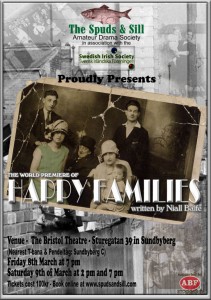 Spuds and Sill are proud to present the world premier performance of Happy Families, an original work by Niall Balfe.

Three performances on the 8th and 9th of March will kick off the Swedish Irish society’s St. Patrick’s week celebrations. We will be at the wonderful Bristol Theater in Sundbyberg,

Click through to see more about the play and book your tickets. Like us on Facebook to keep up with all our news and spread the word to your friends. 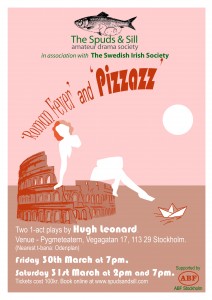 .
Booking is now open for our Hugh Leonard double-feature of two 1-act plays!

The plays will take place on the evenings of Friday 30th and Saturday 31st of March, as well as a matinee show on the Saturday. We are very excited to be performing at the Pygyméteater by Odenplan.  You can book your tickets at our Box Office.

Like us on Facebook to keep up with all the latest updates and for behind the scenes footage. Don’t forget to tell your friends.

Roman Fever
In the warm glow of an Italian afternoon in 1930, two wealthy American widows sit on the terrace of a restaurant overlooking the ancient wonders of Rome. They reminisce about their past friendship and remember a previous visit to the city when they were both young and in love. Now their hopes rest with the prospects of their unmarried daughters. As the sun sets on the Coliseum, bitter jealousies come to light and age-old secrets are revealed.
Pizzazz
While waiting to rent a cabin cruiser on the River Shannon, two apparent strangers, Marion and Conroy, find themselves seemingly brought together by fate. Marion, an outgoing American, persists in trying to engage Conroy in some role-playing much to his dismay. He is not in the mood for games but can’t help but be sucked in. But in this game, where does the role-play stop and reality begin?

We have a location. We have a date. We have two, yes two, plays.

We have a cast and we have plenty of things for backstage and crew members to do. Always fancied yourself as a tea-lady? Come help out on the night. We are also looking for a bouncer and ticket staff. Drop us an email at boxoffice@spudsandsill.com

If your calling is more on the audience side of things, well, stay tuned, booking opens first of march and with it all the details of when, where and of course what!
Super secret teaser: save the date, 30th and 31st march.

We are gearing up for the spring production, and taking the chance to refurb the site a little. Some information will be missing for a couple of days. Please join us in the meantime over at our Facebook page, there is still time to have a say in what play we will tackle or to get an acting part, large or small. Now is also a great time to let us know if you would like to be involved in some other capacity that fits with your schedule.

Stay tuned, as we will be announcing the spring production any day!