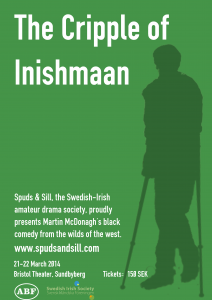 A film team have arrived from Hollywood to the tiny west Ireland islands of Aran. The islanders are all hoping to find stardom and a release from provincial poverty, especially Cripple Billy.

The Cripple of Inishmaan is a black comedy by Martin McDonagh, best known as the writer and director of international box office hits In Bruges and Seven Psychopaths .Set in the thirties in the Aran Islands off the west coast of Ireland, The Cripple of Inishmaan has recently enjoyed an enormously successful run in London’s West End starring Daniel Radcliffe and is heading to Broadway in the spring. But first, Stockholm as performed by Spuds and Sill, the amateur theater branch of the Swedish Irish Society.

Members of the Swedish Irish Society will be getting a discount code in their email soon, so now is the perfect time to join SIS!