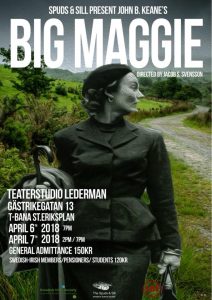 BIG MAGGIE by John B Keane

The play is set in Kerry in the 1960`s.  Maggie, the widow of Walter Polpin, is with her four children at the funeral. Maggie, a matriarchal out-spoken woman who has lived 25 years in an abusive relationship is now the sole owner of the shop and farm. She has major plans for the future, which doesn`t sit well with her children.

Scene 1 takes place in the graveyard during the funeral, Maggie, sitting aside with a cigarette and not actively involved in the wreath laying at her husband`s funeral.

Scene 2 is set in the Polpin shop the evening after the funeral. The door is locked, the cash is counted and the curtains are drawn. The family are gathered and the children are waiting for the reading of their father´s will, but Maggie has other plans.

Scene 3 three months have passed and we are back in the Polpin shop. Mr Byrne, a local man, with an eye for Maggie, is in the shop talking with Gert, the youngest of the Polpin children. Teddy Heelin, a handsome travelling salesman arrives and has his eye on young Gert.

Scene 1 the scene is set in the Polpin shop later the same evening, temperatures are rising.

Scene 2 a year has passed and we are back in the Polpin shop. Katie, Maggie´s oldest daughter is in doing her shopping and we realise that a lot has happened during the past year.

The final scene, later that night, Maggie is alone in the shop, making a phone call to a customer who is behind with payments. A girl enters the shop…