‘Don’t Tell the Wife’ is set in 1960’s Belfast in the Willis household, where Edna Willis is convinced that her plumber husband Bobbie, is interested in another woman; a Catholic! He isn’t, but he does have some secrets of his own. Her attempts to stop him lead to crazy misunderstandings with a sexy French student, a male escort, not to mention…a greyhound called Bridget!

Sam Cree is one of Northern Ireland’s most popular playwrights. Born in 1928, Cree’s comedies have been produced all over the world. His characters are memorable – everyone recognizes his neighbour in them – never themselves of course! Cree wrote scripts for the ‘Carry On’ films in the 60’s & ‘Don’t tell the Wife’ is another of his hilarious comedies! 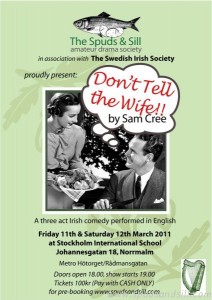