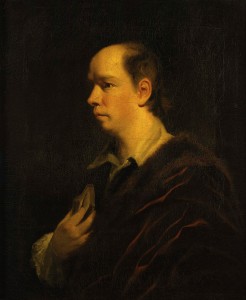 Oliver Goldsmith (ca. 1728–1774) pulled back English theatre from the brink of death at the hands of eighteenth-century sentimentalism, and is widely considered to be one of the most naturally-gifted writers in the history of the English language.

This does not mean that he was charming or popular. During his life, Goldsmith was ridiculed for his physical ugliness, stubborn dedication to unsophistication, and his lowbrow, clownish behavior. An encounter with Goldsmith often baffled his high class peers, who were confused by the contrast between the man and his “angelic” writing.

Oliver Goldsmith was born in Ireland between 1728 and 1731 – his exact birthdate is unknown. The son of a poor clergyman, young Oliver was merely a passable student, too distractible to do well in school; he frequently fought others or wandered off, neglecting his studies. It was something of a surprise to everyone when he was able to graduate from Trinity College with a B.A. in 1749. Afterward, however, Goldsmith spread himself too thin, attempting to study both law and medicine, and soon ran out of funds for either. For the next few years, Goldsmith would tour Europe as a vagrant, busking, teaching English lessons, and entering rhetorical debates for funds and food. In 1756 he returned to the British Isles to serve as a suburban schoolteacher near London, a profession he detested and left as soon as possible.

Goldsmith’s next position was that of an assistant editor with a London journal, The Monthly Review. Goldsmith was at first a voracious reader and reviewer, applying his critical mind to works on everything from satire to botany. Characteristically, his interest was soon exhausted – he quit within five months – but Goldsmith had seen there was a great deal of money and fame to be made in the burgeoning London publishing industry. Goldsmith began to translate older works, and – more confidently than conscientiously – composed his own huge nonfiction tomes on every subject, appealing to a new market of middle-class bookbuyers eager to expand their minds in the Age of Enlightenment. Goldsmith’s nonfiction works are useless now, rife with smoothly-intoned contemporary inaccuracies and Goldsmith’s own outright fabrications, but his works of fiction remain greatly admired.

Outside the theatre world, Goldsmith is known for several beautiful poems, as well as his novel The Vicar of Wakefield, written and sold in 1766 to pay the back-rent on a London flat. As a writer for the stage, however, he is credited with works which created a fundamental change in theatrical repertory in the eighteenth-century. In the early 1700’s, a genre known as the “sentimental comedy” had come into vogue; Goldsmith publicly railed against the poor quality of these plays, which centered around people with “mighty good hearts” speaking “insipid dialogue, without character or humor,” “with a sprinkling of tender melancholy.” Goldsmith wrote plays like The Good-Natured Man in 1768 and She Stoops to Conquer in 1773 to be “laughing-comedies,” an antidote for the preponderance of sentimental “weeping comedy” being presented on London stages.

Goldsmith’s interpretation of this new genre was wildly popular, and Goldsmith used his fame to force himself, largely unwelcome, into the parties of the rich and powerful: his energetic drinking, asinine comments, and stammering, slapstick approach to social interaction were well-marked in high social circles. Goldsmith was protected somewhat by his close friendship with Samuel Johnson, but even Johnson’s literary celebrity could not totally shield Goldsmith from his own reputation. Goldsmith knew he was a public joke, but responded by growing more and more marked in his clownishness – and increasingly depressed. Goldsmith soon found that the combined stress of work and play made him ill. In 1774, at the height of his fame following the first production of She Stoops to Conquer, Oliver Goldsmith died, at the age of forty-five (or thereabouts).

In some respects, She Stoops to Conquer is a revolutionary play. Critics and scholars have pointed to the character of Kate Hardcastle as a feminist hero for her self-determination, cleverness, and willingness to “conquer.” When Kate discovers Marlow’s unique handicap, she shows great initiative and takes control of the situation as as she negotiates the terms of her own engagement.